Anyone Can Experience PTSD 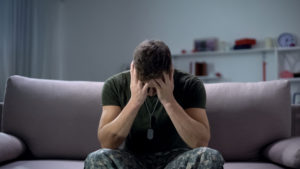 Traumatic experiences leave a massive impact on the lives of those who witnessed them or experienced them. Often, these impacts ripple throughout their lives much longer after the incident is over. Some people have to deal with long-term injuries, while others experience psychological trauma.

In many cases, survivors of traumatic events experience post-traumatic stress disorder (PTSD). Typically, people think of veterans and survivors of war when they think of PTSD. However, war and combat are not the only experiences that can lead to PTSD. Devastating accidents, natural disasters, physical and sexual assault, and much more are traumatic experiences that can trigger post-traumatic stress disorder.

PTSD is often debilitating for the individual experiencing it. It impacts virtually every aspect of their lives, from their personal relationships to their professional lives. PTSD causes individuals to disconnect from the world around them, and many of them experience flashbacks of the event.

Because so many people believe only survivors of war or combat experience PTSD, many people don’t think they have this disorder or do not think they can develop it. However, that is far from the truth.

What is Post-Traumatic Stress Disorder?

Post-traumatic stress disorder is a psychiatric disorder that is triggered by a life-threatening, terrifying, or traumatic event. Those with PTSD either witness the event or experience it themselves. PTSD was formally known as “shell shock” in World War I and “combat fatigue” in World War II, but combat veterans are not the only ones to experience it.

There are plenty of events that can trigger PTSD in individuals, such as:

During these events, your body responds by engaging in your “fight or flight” instinct. Your body releases stress hormones, such as adrenaline and norepinephrine, giving you a surge of energy. Some tasks, such as short-term memory, are temporarily paused.

However, for those with PTSD, their brains are stuck in the danger mode well after the danger has passed. They continue to stay on edge. Their bodies continue to send out stress signals, which trigger PTSD symptoms.

Like we already said, anyone can experience post-traumatic stress disorder, which is why it is so vital to recognize the symptoms early.

It is not uncommon for a person to experience PTSD symptoms for up to a month after a traumatic event. However, in many cases, symptoms do not appear until several months or even years after the event. Typically, these symptoms fall into four categories: intrusive memories, avoidance, changes in cognition and mood, and changes in physical and emotional reactions.

How Common is PTSD?

Experiencing trauma is not a rare occurrence. Roughly 6 out of 10 men and 5 out of 10 women will experience trauma at least once in their life. While these experiences vary, the impacts are similar.

Between seven or eight out of every 100 people (roughly 7-8% of the population) will experience post-traumatic stress disorder at some point in their lives. Nearly eight million adults have PTSD in a given year, equaling just a small portion of those who have gone through trauma.

Women are more likely to experience PTSD than men, with 10% of women and 4% of men living with it.

Unfortunately, there is no cure for this psychiatric condition, but there are many treatment methods available that can help treat it. Remember, not everyone who goes through trauma develops PTSD, nor does everyone who develops PTSD need treatment.

Some people’s symptoms disappear overtime on their own, while others need professional treatment to recover. If you have disturbing thoughts and feelings regarding the traumatic event lasting for longer than a month, which keeps you from getting your life under control, speak with a mental health professional. The sooner you seek treatment, the better.

Post-traumatic stress disorder can be devastating for many. Trauma is not rare, and it often leaves a lasting impact well after the initial event. PTSD can affect your professional life, personal relationships, and overall health. If you or a loved one are experiencing symptoms of PTSD, contact Lifeworks Counseling Center today to learn how we can help.