Mental Illness Often Plagues Those in the Military 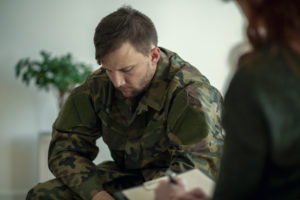 Even though the United States has made an effort to increase awareness and support for those struggling with mental illness, more and more people still struggle with their mental health. The National Institute of Mental Health estimates that one in five adults in the U.S. lives with a mental illness, equaling as much as 46.6 million Americans. Unfortunately, that number continues to rise. Mental illness can affect anyone from any demographic. One particular group that does not receive the attention they deserve is veterans.

In a recent report from a Veterans Affairs analysis, the rate of veterans’ suicides continues to rise, reporting a 6.1% increase in the number of suicide deaths from 2005 to 2017. While this number may not seem large, it’s important to know that the number of veterans in the United States continues to decrease as older generations get age. This population dropped 18% from 2005 to 2017. With the Veteran population getting smaller, and Veteran suicides increasing, this statistic is alarming.

With Veterans Day approaching on November 11th, the team at Lifeworks Counseling Center would like to increase awareness on the growing struggles of mental illness within the veteran community while also extending our gratitude for their service.

According to the Veterans Affairs (VA), more than 1.7 million veterans received treatment from a VA mental health specialty program during 2018. Many more vets seek treatment elsewhere. Both veterans and active-duty military struggle with their mental health. A study in 2014 found that one in four active-duty members displayed signs of mental illness.

According to Mental Health First Aid, approximately 20 veterans commit suicide every day. 30% of active duty and reserve military that were deployed in Iraq and Afghanistan receive treatment for a mental health condition, totaling as much as 730,000 men and women. Unfortunately, almost half of all returning veterans receive no mental health treatment when they need it.

The Veterans Affairs analysis mentioned earlier states that women with prior military experience are more than twice as likely to commit suicide as their civilian counterparts, while male veterans were 1.3 times more likely than men who hadn’t served.

Countless veterans in the country struggle with their mental health yet don’t receive the treatment they need. We hope to encourage you to spread awareness about veterans and mental health to end the stigma surrounding it.

There isn’t one mental health condition that plagues the veteran community. Each vet is different, and their brain responds differently to certain stimuli. It is important to know for both veterans and civilians that mental illness does not have one face but can manifest in different ways.

There are often three major mental health concerns that vets and active-duty members deal with:

Because there is such a strong stigma surrounding mental illness in the military, many vets do not receive any treatment. When they don’t receive treatment, they often seek relief some other way. This typically appears in the form of substance abuse.

However, many believe seeking help for their substance abuse disorder would negatively impact their military career, which is not the case.

While mental illness is prevalent throughout the veteran community, many vets do not take advantage of the resources the VA and other mental health services offer. As with any group, veterans face many barriers and stigmas regarding their mental health. Because they are or were in the military, the world views them as the toughest people there are. When veterans do not receive the treatment they need, their risk of suicide increases.

Some of these barriers are:

While it is understandable that many veterans may feel uneasy or ashamed for seeking treatment, Lifeworks Counseling Center would like to remind you that admitting your struggles and seeking help is not a sign of weakness. It is a sign of strength.

Many veterans throughout the country often live their life suffering in silence. Lifeworks Counseling Center encourages you to take this Veterans Day to show servicemen and women, both active and retired, that their mental health matters. Let them know that they aren’t alone and that they have nothing to be ashamed of. Above all else, let them know you are thankful for their service. If you are a veteran and require mental health treatment or know of a vet who does, contact us today.