Parents Should Limit Their Smartphone Use 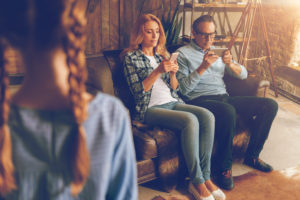 In today’s digital world, parents across the country are aware of the impact digital devices have on their children. However, hardly anyone recognizes how harmful parents being on their smartphone may be to their children and their development. After all, young children are very perceptive of what their parents are doing. They often crave the attention of their parents. Children learn and develop important social and cognitive skills from interactions with their parents.

However, these interactions are often disrupted. Not by digital device use from children, but from digital device use by parents. That’s right. Smartphone-addicted parents may be harming their child’s development. Even though today’s parents spend more time with their children than before, they don’t give them the attention they need. While they may be physically present, but they aren’t emotionally present.

Parent-child communication is crucial to a child’s development. Without it, they can’t effectively develop the social, cognitive, and behavioral skills needed to be a happy and successful adult. This isn’t to say that using digital devices is 100% safe for children, but to argue that parents’ screen use is an underappreciated problem.

Today, Lifeworks Counseling Center is here to shed some light on the issues surrounding smartphone use and parenting, while highlighting the importance of communication between parents and children.

The Importance of Communication

Humans are social beings. We thrive on interpersonal communication. When children are spoken to, their cognitive development is boosted. One study even found that infants around one-years old that are spoken to in a high-pitched, exaggerated, and simplified voice knew twice as many words when they turned two than those who weren’t.

Face-to-face interaction is what truly stimulates a child’s mind. According to Kathy Hirsch-Pasek, “Language is the single best predictor of school achievement, and the key to strong language skills are those back-and-forth fluent conversations between young children and adults.”

The problem becomes evident when you realize that smartphones disrupt these conversations. Children aren’t able to craft and hone their language skills because of their smartphone-addicted parents spending more time on their devices than communicating with their children.

The Impact of Smart Phone Use

Several negative impacts come from parents spending too much time on their smartphones. To be clear, we are not demonizing the use of smartphones. After all, they help people communicate with each other, complete work, learn, and so much more. However, there is a time and a place for smartphone use, especially for parents.

While parents are spending more time with their children than ever before, they aren’t really present. They are glued to their phones, starving their children of the attention they need. We must focus on some of the negative outcomes of smartphone-addicted parents.

Another study published by Developmental Science studied infants and toddlers around seven months to two years old. Their temperament, social engagement, exploration, and more were all observed. In their findings, researchers reported that these children were more distressed. They also noted that they were less likely to explore their environment when their mothers were on the phone.

Furthermore, a study by a pediatrician and her colleagues focused on how smartphone use connected to parents ignoring their children. They observed 55 caregivers while they ate with one or more children in fast-food restaurants. Of the 55, 40 of them completely immersed themselves in their phones. Some caregivers even ignored the children entirely. The researchers also found that typing, swiping, and other non-vocal actions were more evident than phone calls.

To no one’s surprise, the children started to compete for their parents’ attention. They would act out or be noisy. Many parents were often more irritable and impatient while they were on their phones, which lead to worse behavior from both parents and children. As we mentioned, communication is crucial to a child’s development. If they aren’t getting it from their parents, then they miss out on important lessons.

In another study, researchers interviewed a thousand children between the ages of 4 and 18 They were asked about their parents’ smartphone use and how it made them feel. Many of the children expressed feeling “sad, mad, angry, and lonely” whenever their parents were glued to their digital device. Some children even admitted to hiding or breaking their parents’ phones to win their attention.

Improve Your Relationship with Your Smartphone

If you are a smartphone-addicted parent, you should begin making a concerted effort to control how and when you use your phone. After all, your child’s cognitive, social, and emotional development depends on it. We have provided some useful tips to keep your smartphone use in check:

There is nothing wrong with using your smartphone. After all, it allows you to shop online, communicate with loved ones, and so much more. However, a child’s development can be hindered because of smartphone-addicted parents. Lifeworks Counseling Center would like to encourage you to limit the amount of time spent on your phone in the presence of your children to provide them with the attention they require.