Paranoia and how to overcome it 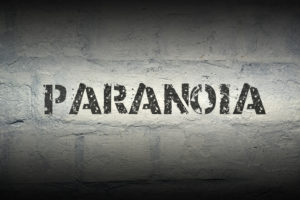 It can be easy to confuse paranoia and fear. To an extent the two are very similar, nevertheless, paranoia is driven from suspicion. It starts by acts performed by other people whose motives are driven to you as hostile. Some people cannot independently diagnose themselves as paranoid, and usually, a therapist does that. When this happens, it means that you are interpreting malevolence when in actuality there is none.

Whether you feel paranoid about someone leaving the gas on in your house or someone messing with the brakes on your car, your judgement and train of thought have been compromised. One of the main reasons why overcoming paranoia is in your best interest is because you may find yourself harming yourself or innocent people because of your beliefs.

Paranoia may also lead to you not seeking medical intervention when it is necessary, i.e. fear of the doctors conspiring to turn you in to the FBI. The feelings and beliefs associated with paranoia often times lead to isolation and emotional segregation from loved ones. On the other extreme, the paranoia can become shared or transferred to others, which can be devastating.

The process to overcoming your paranoia entails recognizing when you are wrong about a situation and then preventing yourself from acting out. There is no true warning sign that can be followed as a rule of thumb because the risk of you still believing yourself over others is relatively high. When the paranoia begins to interfere with your quality of life and relationships, it is time to seek professional help.

A therapist will most likely begin the process by understanding your paranoia. This can be difficult or simple. The bottom line is that there are millions of paranoias and there are billions of people in the world. Narrowing down everyone’s paranoia categorically is not justifiable, hence, the therapist will focus on you as an individual.

You may think that you are crazy, or a loved one or a colleague may say that to you, however, being crazy or normal has nothing to do with paranoia. As an individual, you are entitled to your feelings as well as your thoughts. Just because they may not be shared with societal norms does not make them any less real for you.

After you have acknowledged this basic comprehension of self, the next step will be extract as much information as possible about your paranoia. Time has a multitude effect on your perception of the false belief, and understanding its web is important if you want to get it at its core and bring it down.

The final part of overcoming your paranoia will include coping. There is no guarantee that after therapy you will walk into the world forgetting you believed the FBI was out to get you, especially if you see someone in an FBI uniform. You will work with your therapist and learn various mechanisms involving breathing techniques and retraining your thought process to not let those feelings and thoughts overwhelm you.

If you are in the Dallas and Carrollton, Texas area and are ready for counseling, contact us today. The therapists at Lifeworks are here to help you get one step closer to overcoming and understanding your paranoias. Paranoia is an acquired debilitating state of being, so let’s get rid of it together.

From humble beginnings in 1992, Lifeworks has grown to be one of the largest counseling and life coaching centers in the North Dallas area. Our licensed Psychologists and Professional Counselors offer a broad spectrum of expertise; focusing on specific areas. In addition, we have been able to provide expertise in the areas of psychological, psycho-educational, and neuropsychological testing for all ages.