Anyone Can Help Spread Awareness for Mental Health 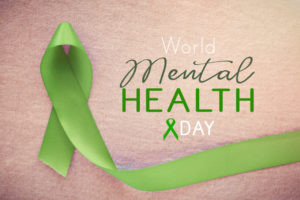 We all know how important taking care of one’s health is. Being sick can cause you to miss work or school. It can even affect how well you can complete everyday tasks like cooking, cleaning, and more. While it is incredibly important to make sure your body is healthy, it is equally as important to make sure that your mind is healthy as well. That is why the World Federation for Mental Health (WFMH) established October 10th as World Mental Health Day.

On this day, you can join others who advocate for mental health awareness with the hopes of improving the mental health of people all across the globe. Mental health struggles can affect anyone, regardless of their race, gender, religion, or sexual orientation. WFMH established World Mental Health Day to educate those around the world about mental health and advocate against the social stigma surrounding mental illness.

This year the WFMH has chosen to make suicide prevention World Mental Health Day’s theme. Suicide has been a constant throughout most of history. However, due to complex reasons, the rates of suicides throughout the world continue to increase to alarming levels.

Suicide is defined as death by self-inflicted dangerous behavior with the individual having the intent to die as a result. However, not everyone completes this action. Some try a suicide attempt, which is when an individual inflicts a harmful, potentially fatal action on themselves with the intent of dying. Suicide ideation is when someone thinks, considers, or even plans their own suicide.

Suicide continues to become a growing issue in many parts of the world:

Many often believe that suicide is only something adults struggle with, but that is not the case. Many children and adolescences continue to commit suicide, and these rates are only increasing.

The depression rates of children age 14 to 17 rose by greater than 60% over the years 2009 to 2017. In 2017, a little over one in eight young Americans aged 12 to 15 experienced a major depressive episode. These rates also mirrored the rates of suicide in these age groups.

The goal for World Mental Health Day is to make a concerted effort in raising awareness of mental health struggles and suicide. While this year’s theme is suicide prevention, there are still countless mental health issues and conditions that you can still raise awareness for, including:

This day was created to highlight some important key facts that will help the cause of this day and those advocating for mental health, such as:

One of the most important goals of this day is to reduce and, hopefully, eliminate the stigma surrounding mental health and suicide. Many groups around the world shame those who suffer, preventing them from admitting their struggles and seeking the care they need. This stigma is a major reason why so many don’t seek treatment until it is too late.

After discussing with friends, family, and medical professionals, results showed that 90% of those who died by suicide showed signs of a mental health condition.

What You Can Do

The World Federation for Mental Health is highlighting the statistic that every 40 seconds someone loses their life, no matter the age, to suicide by enacting their “40 seconds of action” initiative to help raise awareness for this epidemic and to erase the taboo surrounding it.

There are several things you can do to help WFMH, WHO, Lifeworks Counseling Center, and other organizations and advocates around the world spread awareness about mental health and suicide. Somethings you can do include:

You can help spread awareness for mental health and suicide prevention on World Mental Health Day in so many ways. You don’t need an organization to be a part of this day.

Suicide is a growing concern throughout the world. The rates of suicide continue to increase, while the stigma surrounding it remains. World Mental Health Day hopes to increase efforts in raising awareness for mental health. Another main goal for this day is to erase the stigma surrounding mental illness to ensure those suffering do not feel ashamed to reach out. If you or a loved one struggle with your mental illness, reach out to Lifeworks Counseling Center to seek help.