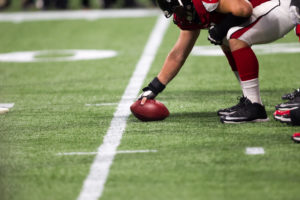 As the dust has settled on Super Bowl LIV and the NFL season, the glitz and glamour of the American gridiron have begun to fade until the start of the next season. NFL players are given time to relax and decompress until the offseason begins. This period of recovery is not only necessary for players’ bodies, as they spend weeks hitting each other at full speed, but also players’ minds.

In recent years, players’ mental health has become a priority for many fans, owners, and players. Concussions have been a significant cause for concern for many current NFL players, as well as parents of young children playing the game. The NFL has made an effort to help NFL players, past and present, with their mental health with the creation of Player’s Trust. Additionally, in 2019, the NFL began requiring teams to have a mental health professional in building for the players and coaches to utilize.

Unfortunately, the very nature of the game often leads to increased risks for mental illness. In 2002, Dr. Bennet Omalu was the first person to discover chronic traumatic encephalopathy, commonly referred to as CTE, which is a degenerative brain disease. The damage this condition does to the brain often leads to worsened mental health and often suicide.

Lifeworks Counseling Center understands how important ending the stigma of mental illness is, regardless of who you are. The NFL is a hyper-masculine sport that often sees mental illness as a weakness, which forces those suffering not to speak up. We must eliminate this way of thinking, or more players may suffer alone.

Chronic traumatic encephalopathy (CTE) is a progressive degenerative brain disease most often found in athletes, military veterans, and those with a history of repetitive brain trauma. Unfortunately, healthcare experts can only diagnose CTE in an autopsy after an individual’s death to allow professionals to specific certain areas of the brain. A protein called Tau begins to develop in CTE, forming clumps that progressively spread throughout the brain and kills brain cells.

The most commonly accepted cause of CTE is repeated trauma to the head and brain. Football is a contact sport that involves constant collisions between players. While the NFL continues to push for player safety, particularly when it comes to the safety of the head and neck, head injuries continue to happen.

Many consider concussions to be a cause of CTE. Concussions occur when a sudden impact causes your brain to bounce around and strike the sides of your skull or turn abnormally. Players can recover from these concussions, but multiple concussions can lead to severe neurological damage.

However, concussions aren’t the only cause for CTE. Repetitive non-concussive trauma to the head over several years often leads to the development of CTE.

Common symptoms of CTE include:

CTE symptoms don’t develop right away. They often take years before they make themselves apparent, appearing when it’s too late.

Current and former NFL players are at high risk of suffering from CTE and mental health issues. One of the most infamous cases of a player suffering from CTE happens to be that of Junior Seau, former All-Pro linebacker for the San Diego Chargers, who took his own life in 2012. Healthcare experts discovered that Seau was suffering from the degenerative brain disease at the time of his suicide. His brain was donated by his family to be studied following his death.

Former Chicago Bears running back and a member of the hallowed 1985 championship team, Dave Duerson, was also a former player who took his life due to his declining mental and neurological health. Duerson understood the damage done to his brain and left a note for his ex-wife that asked her to have his brain examined by the NFL.

Seau and Duerson represent just two of a growing list of affected players. However, with their and other players’ suicides along with continued discoveries made on mental health in the NFL, more and more players are putting their health and safety first.

Many football experts and fans consider Rob Gronkowski to be one of the greatest, if not the greatest, tight ends in NFL history. He also had a history with concussions and repeated brain injuries, along with other serious injuries. He decided to retire in March 2019 before the age of 30.

Most recently, All-Pro linebacker for the Carolina Panthers, Luke Kuechly, announced his unexpected retirement from the NFL back in January 2020. Like Gronkowski, Kuechly also had a history of concussions and head injuries. He was only 28 years old when he retired.

They join a growing list of players retiring from the game early to protect their physical and mental health.

A recent study found that there may be a correlation between the time spent playing in the league and their position and the development of mental illness. The researchers analyzed surveys received from about 3,500 former NFL players with an average age of 53. They were asked about how long they played, what positions they played, their injury history, and more. They were also given questionnaires that are commonly used to screen for depression and anxiety.

The results of the findings are as so:

NFL players with extended careers and those that play in positions with the most hard-hitting contact are more likely to suffer mental illness in their life.

Steps in the Right Directions

The NFL has been making a concerted effort to protect its players from severe head injuries, as well as providing them with better treatment. They have also made it a priority to lift the stigma surrounding mental health in the locker room by having each franchise employ a mental health specialist. They provide their players with resources to reach out for help if their mental health begins to decline. At Lifeworks Counseling Center, we would like to continue seeing the stigma surrounding mental illness lifted, not only in the NFL but worldwide.