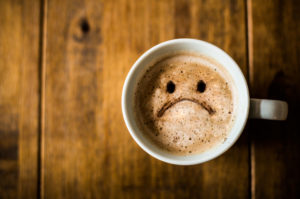 Caffeine is the most widely used drug in the entire world. In fact, about 85% of the American population consumes caffeine in one way or another every day. Caffeine is an extremely powerful stimulant. It keeps you alert and energized, but it can also have adverse reactions. Too much caffeine consumption can lead to increased anxiety or worsen existing anxiety disorders.

According to the Nation Institute of Mental Health, roughly 31% of U.S. adults experience some form of anxiety disorder throughout their life. Because of this, caffeine can lead to worsened anxiety symptoms.

Correlation Between Caffeine and Anxiety

When consumed, caffeine encourages the body to release the stress hormone, cortisol. Cortisol leads your body to experience a stress response. These responses are synonymous with feelings of anxiety and panic, making you feel on edge.

Anxiety is our body’s response to situations that are often deemed threatening or worrisome, promoting the body’s “fight or flight” response. As mention earlier, caffeine boosts the release of cortisol, which also encourages this same response. You may overreact to regular situations that are not dangerous or stressful after consuming caffeine. Some symptoms of caffeine include:

Many of these symptoms are also the same symptoms as most anxiety disorders. Whenever you consume caffeine, you are putting your body in a state of being on edge and ready for a “fight or flight” situation. You are essentially forcing your body to simulate feelings of anxiety.

For those that suffer from existing anxiety disorders, their body may react strongly to even small doses of caffeine. Their anxiety disorder symptoms are significantly worsened.

According to the U.S. Food and Drug Administration (FDA), the average person can drink 400 milligrams or less of caffeine a day without experiencing any negative side effects. This equals about 4 cups of coffee.

However, if you do drink caffeine regularly, you should not quit caffeine cold turkey. This will lead to caffeine withdrawal. Symptoms for this include:

While it is not near as dangerous as opioid withdrawal, caffeine withdrawal can still be difficult to deal with. Consider discussing with your doctor ways to gradually cut back on your caffeine consumption. It is important to always track how many milligrams of caffeine you are drinking, so you can minimize your intake. Once you’ve figured it out, you can slowly decrease your consumption.

Caffeine has become virtually omnipresent in today’s world with most adults consuming caffeine at least once during the day. While caffeine has a few benefits, it tends to force the body to feel symptoms of anxiety. Once you begin to experience these symptoms, you should make an effort to cut back on the amount of caffeine you consume. If you are experiencing increased anxiety or anxiety without the use of caffeine, contact Lifeworks Counseling Center to learn how we can help.