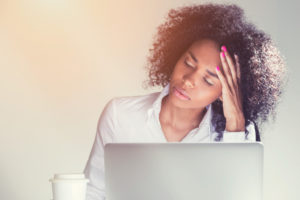 Americans are some of the most stressed people in the world according to the most recent results from an annual Gallup poll.

Gallup conducts these polls yearly, measuring the stress, anger, and worry of individuals in countries around the world. Representatives from 143 countries were studied, including over 1000 from the United States. The researchers would ask Americans whether they had experienced feelings of stress, anger, or worry the previous day.

The results for the United States were the highest they had been in over a decade.

When asked about how they felt the previous day, the majority of Americans (55%) reported they had felt some form of stress during the day in 2018. This put the U.S. just four points behind the world leader Greece (59%) and 20 points over the global average (35%).

Things do not appear as bad when it comes to anger, though. While Americans reported feelings of anger more so than in recent years, they still match the global average at 22%. They are half as likely to experience anger as the world leader, Armenia (45%).

However, the findings for the country are not all bad. While the United States reported greater feelings of stress, anger, and worry, they also reported high feelings of positive experiences.

Which Americans Felt the Most Stress, Worry, and Anger?

Gallup found that younger Americans, aged 15 to 49, were among the most stressed and worried in the country, ranking 64% and 50% respectively. Americans 50 and over were much less likely to express stress and worry.

Outside of younger Americans, those in the poorest 20% in the nation also reported higher scores of stress and worry. 68% of the poorest Americans felt stress while 56% of them felt worried. The richest 20% only felt 46% and 41% in these categories.

Another interesting category of Americans were those who approved of the job the current president is doing. While Gallup does not ask political affiliations, it was found that those who disapproved of the job current U.S. President Donald Trump is doing were more stressed and worried (62% and 51%).

These are telling statistics because, under President Trump, the economy in the United States has seen significant improvement. With major changes in the U.S. economy trending in a positive direction, it is assumed that many Americans would feel less stressed and worried, but the opposite is true.

Gallup reported that 2017 was arguably one of the darkest years they’ve recorded since conducting this pool. Levels of stress, worry, sadness, and pain soared to new heights globally during this year. However, even following a year of economic growth, the U.S. continued in a negative trend. This simply highlights that economic data and the GDP only helps paint part of the picture.

The levels of negative emotions have continued to rise higher than they were during the U.S. in the recession. More information needs to be collected in order to truly understand why Americans continue to have increased negative feelings. If you are having excessive and debilitating negative feelings, the counseling services at the LifeWorks Counseling Center may be able to help you navigate your emotions.