5 Things People with Anxiety Do That Come Off as “Rude” 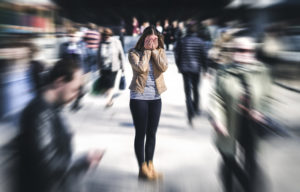 Unfortunately, many stigmas surround most, if not all, mental health disorders. Whether people don’t understand the effect mental illness can have on someone or do not believe in them, far too many people cannot comprehend what someone else is going through, making it hard for them to understand why people do the things they do. That is often the case for people with anxiety.

Anxiety is one such condition that can be debilitating and affect one’s daily life. These feelings often lead individuals to isolate themselves to better cope with their symptoms. In many cases, social situations are triggers for people with anxiety. Unfortunately, there are things that people with anxiety do that come off as “rude” to those that don’t know or understand this disorder.

Those living with anxiety have developed coping mechanisms that may come off as rude but are only a result of their anxiety disorder. For those with no knowledge of these mental health disorders, it’s hard for them to recognize signs or symptoms of anxiety and are quick to write off those with this disorder.

Today we will look at a few things people with anxiety do that come off as “rude.” It’s important to note that while these things appear rude to you, they are often the result of their mental health disorder. If you or someone you love currently suffers from anxiety or another mental illness, contact Lifeworks Counseling Center to learn how we can help you.

Making plans can be a big deal for those living with anxiety. Often, being in a social situation can trigger their symptoms, which only makes things worse. However, that does not mean they don’t enjoy your company or don’t want to spend time with you. They understand their condition and know what to do to cope with it.

People with anxiety might come up with an excuse as to why they can’t hang out. They might agree to a plan and then cancel last minute or never show up. Canceling plans does not mean they weren’t interested or aren’t still interested. It most likely means that they experienced severe anxiety that caused them to cancel their plans.

If this does happen to be the case, reach out to your loved one and let them know it’s okay. Assure your friend that their mental health takes priority, and you will be there if they need you. Reschedule to a time that best fits you both.

Many people view eye contact as a sign of confidence and respect. Many consider it to be a staple in most social interactions. However, for people with anxiety, it can be overwhelming. For many, feeling looked at can make people more attuned to how they look and their body’s physiological responses (heart rate, sweating, breathing, etc.). As you can imagine, when you spend too much time thinking about your appearance, you begin to feel self-conscious and anxious.

For those with anxiety, the idea of being social is overwhelming as is, but the feeling of being looked at can make things worse. People with anxiety find it difficult to maintain eye contact (whether while speaking or listening).

If you are aware of someone’s anxiety, try not to think about them avoiding eye contact too much. Try to understand that for them, maintaining eye contact can be overwhelming.

3.) Asking You to Repeat Yourself

In conversation, the general rule is when you are not speaking, you listen to what the other person has to say. However, for people with anxiety, their mind is often racing in different places. They feel overwhelmed with thoughts (also known as “brain fog”). Unfortunately, this also means they miss out on important information or can’t quite process it fast enough.

It’s crucial to remember that this is not their fault, and it doesn’t mean that person is not interested. Their anxiety clouds their brain and pulls their attention elsewhere. If they do ask you to repeat yourself, try to avoid getting frustrated and repeat yourself clearly.

People with anxiety are often always on edge. While they might have their anxiety in check most of the time, any number of stimuli can trigger their symptoms. As we’ve stated before, these individuals always have thoughts racing through their heads, some good and some bad. Naturally, they are often on edge.

Even the smallest thing can push them over, causing them to snap at someone else, react harshly and sharply, or completely blow up without ever meaning to do so. Try to remember that someone’s anxiety has them on edge at all times. If someone does snap at you, try not to react to it harshly. Try to understand why they reacted the way they did before responding.

5.) Talking Too Much or Too Little

Anxiety affects people in different ways. For some, it can cause people to be short. Other people see this as rude. They feel like this shows that the person doesn’t want to be in the conversation or doesn’t care what the other person has to say. However, people with anxiety often use short responses as a defense mechanism. The idea of opening up and being vulnerable during a conversation can be overwhelming and scary.

However, the opposite can also be true. For some, silence can be unbearable and can make symptoms of anxiety worse. To combat this issue and avoid uncomfortable situations, people will talk non-stop, often talking over others. As you can imagine, this can come off as selfish and insensitive. Even further, the content of the conversation is often irrelevant to the topic at hand.

Their mental health disorder causes them to act in a way that appears inappropriate or rude to others. However, the person is only reacting to their symptoms. Before thinking poorly of them, be patient and ask if everything is alright. Try to understand what they are going through before making any judgments.

If you or someone you love is struggling with a mental health disorder like anxiety, contact Lifeworks Counseling Center and let us help you live life well again.

From humble beginnings in 1992, Lifeworks has grown to be one of the largest counseling and life coaching centers in the North Dallas area. Our licensed Psychologists and Professional Counselors offer a broad spectrum of expertise; focusing on specific areas. In addition, we have been able to provide expertise in the areas of psychological, psycho-educational, and neuropsychological testing for all ages.